The 2014 edition of the biennial match between the USIC and France IC got underway when a full squad of 12 USA men, accompanied by wives and/or significant others, arrived in Nice, France at the Westminster Hotel, which is owned by former French Davis Cup player Jean-Noel Grinda. The French IC greeted our entire group with a delightful cocktail buffet at the hotel where we had a chance to both greet old friends and make new ones. We were hosted by Michel Leclercq, former French Davis Cupper, and he asked Les Nicholson, former USIC president, to say a few words about the event. In 2006, Les actually proposed the idea of a competition between our two countries in honor of Robert "Bobby" Abdesselam, long time president of the French IC, and Eugene "Gene" Scott, long time president of the USIC, both of whom had recently passed away. Back then, Les had presented the French IC with a beautiful large silver bowl to be used as the trophy for this newly established Presidents Cup competition.

Two years ago, the USIC won the last meeting, which was played in Philadelphia. The total score since 2006 was tied 2-2, with the home team having been victorious in each of the last four matches. Our tennis schedule kicked off Sunday at the Monte Carlo Country Club, where the Monaco IC hosted both the USIC and the French IC in a terrific day of "friendly" mix and match doubles at arguably one of the most beautiful tennis venues in the world. This is the site of the Monte Carlo Rolex Masters held each year in April. We were treated to lunch on the terrace overlooking the Cote d'Azur, with competitive doubles on the red clay for most of the afternoon. This was followed by a lovely tour of Monaco, where we returned to the Club for a delightful champagne buffet, and a warm welcome from the president of the Monaco IC.

Monday was a practice day for the US team at the Nice Lawn Tennis Club where each of us participated in doubles and singles for most of the morning. Later that afternoon, we all went on what is known as the "Little Train" tour of Nice, which took us to the Old City, the flower market, the Place Massena, Place Garibaldi, the marina, and Castle Hill, or Colline du Château as it's called in French, which was more "hill" than "castle".

Tuesday kicked off the first day of official competition at Tennis Club de Beaulieu, which is in the small upscale enclave of Beaulieu sur Mer. This magnificent private club, which once belonged to royalty, proved to be an elegant venue for our two competitive teams. We played singles in the morning, broke for a delightful lunch on the sunken patio terrace under umbrellas and shady trees. Doubles followed lunch and by the end of the day, Team USIC led Team France IC by the score of 7-3 (please see all pairings and final scores on the attached summary sheet).

Wednesday was a day off between our match play and presented the opportunity for many of us to either go on arranged tours or independent exploration of the beautiful area.

Our Presidents Cup match culminated on Thursday at the Nice Lawn Tennis Club, where the competition was intense, as we had 13 matches scheduled and Team USIC needed to win five (5) in order to clinch the Cup. The morning started out against us with Team France IC winning the first five singles matches, going ahead 8-7, with eight doubles matches to follow lunch. And Team USIC WON seven of the eight, giving Team USIC the Cup by a total score of 14-9, marking the first time the visiting team won on foreign soil.

That evening, the French IC hosted us for a truly memorable evening at the Blue Beach Restaurant right on the waters edge in Nice for our gala dinner. Thierry Pham, the French IC president, welcomed both teams, and presented the USIC captain, Blair Neller, with a commemorative silver box engraved with the event name, venue, and date. Blair, in turn, presented Thierry and their captain, Bruno Renoult, with a sterling silver picture frame containing a color picture of the twelve USIC players (taken on the terrace of Monte Carlo CC). The French IC made Blair Neller an honorary member of the French IC, and presented him with a French IC tie. On behalf of Team USIC, Blair then presented Bruno with a USIC tie, proclaiming him an honorary member of the USIC. All in all, it was a perfect end to what had been an outstanding week on the Riviera with our gracious French hosts. 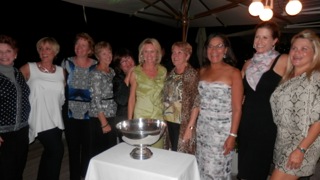 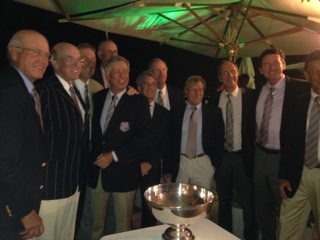 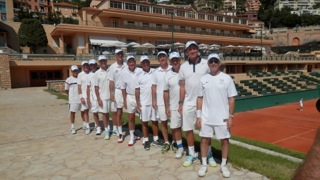 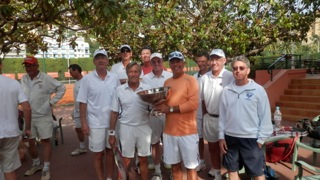 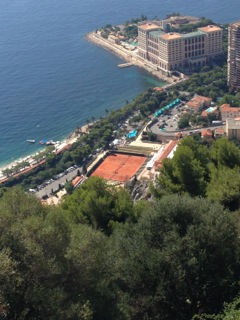