The sixth Presidents’ Cup took place November 9th through the 11th at the La Jolla Beach & Tennis Cub. The spectacular destination resort, located just a few lapping waves from the shores of the Pacific Ocean, a bit north of San Diego, teamed with the beach perfect weather providing the picture-perfect setting to showcase an all-star cast of 35 to 70 year-old performers participating in the biannual competition between the International Clubs of the United States and France. 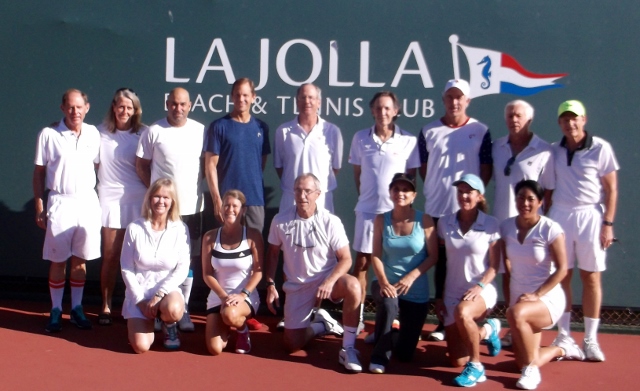 At the end of two days of play, the US had earned more victories than their opponents in the 28 singles, doubles and mixed doubles matches that were contested. During the tournament dinner the first night, Charles (Charlie) Hoeveler, the US captain, pointed out that the US led, but that was because the home team had won all four of the matches that day and they each ended in a Super Tie-Break. Had that not been the case, the score would have been tied, 7-7. “The overall level of play was off the charts,” Hoeveler said. “It was exciting because there were so many close matches.” 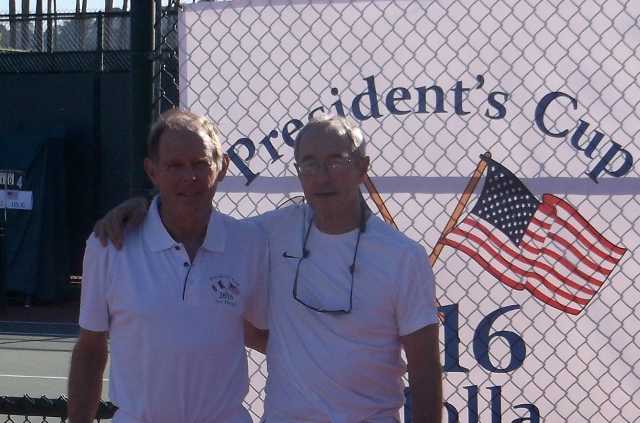 Hoeveler, who has played 15 IC contests, formed the “Presidents’ Cup Dream Team”, with a fellow Dartmouth College alumni - William (Bill) J. Kellogg, President & CEO of the La Jolla Beach & Tennis Club, (which has also hosted the IC Avory and Amigos Cup contests in the past). Over the years, he has been on the US team at more than half-dozen IC events (including the Presidents’ Cup). Based on his experience, he believed the level of play was one of the best he had ever seen at an IC gathering.

The US-France competition was an outgrowth of former USIC president Les Nicholson’s desire to honor the memory of two of the game’s icons – Robert "Bobby" Abdesselam and Eugene "Gene" Scott. They both passed away in 2006, (the first year of competition). They were alike in so many ways – intelligent and skilled at compartmentalizing issues. On and off court, they juggled situations adroitly. They were cultured and classy, but more specifically, they each had a presence that spoke volumes. They were truly “Renaissance Men.” 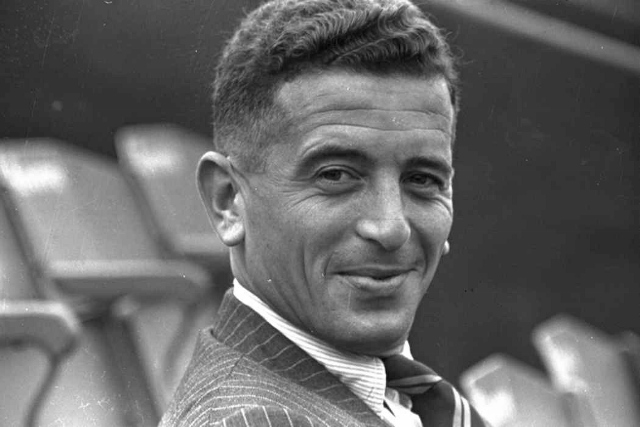 Abdesselam was born in El-Biar, Algeria. He was the French Junior Champion in 1937 and ’38. In time, he became the country’s No. 2 player and was a Davis Cup participant from 1947 until 1953. His best Grand Slam tournament singles showing took place in 1949 when he was a Roland Garros (French National Championships) quarterfinalist. In 1946, he was the winner of the All England Plate, a competition that was held for those who lost in the first or second round of singles at Wimbledon. 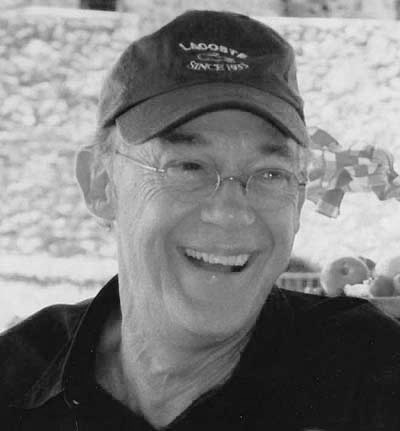 Scott was from St. James, New York, and was a phenomenal high school athlete. He lettered in hockey, soccer, tennis and track. At Yale University, he added lacrosse to his impressive list of sports participation activities. But, tennis was his real love. In 1963, he was ranked No. 4 in the US, and two years later he achieved his highest world ranking - No. 11. He was a member of the US Davis Cup team in 1963 and ’65. In addition, he was the US Real Tennis (Court Tennis in the US) champion for five consecutive years (1973-’77).

Abdesselam was head of the French International Tennis Club from 1993 to 2004. Scott was president of the USIC between 1976 and 1998. The two are comparable in many other ways. The Frenchman earned a law degree at the Law Faculty of Paris. Scott was a University of Virginia Law School graduate. While working at a Wall Street law firm in 1967, he escaped from the day to day grind and rode the subway from New York City to Forest Hills to play the US National Championships. Using the newly developed Wilson T-2000, (which René Lacoste had invented in France in the early 1960s), he reached the tournament semifinals. His best showing in Europe, like that of Abdesselam, was reaching the 1964 Roland Garros quarterfinals.

Though nearly 18 years apart in age, (Abdesselam was born January 27, 1920 and Scott on December 28, 1937), they could, without too much of a stretch of the imagination be considered “Two peas in a pod”. Both were passionate about tennis, life, friends and causes.

In 1942, Abdesselam joined the Algerian World War II forces. He was part of the French Expeditionary Corps that was involved in the campaign for Italy. Because of his courage in action, he received the Cross of War 1939-1945, and the US Bronze Medal. Between 1946 and 1963, he was counsel to the Court of Appeals of Algiers. He was elected a Member of National Assembly (MNA) in 1958, and supported a French Algeria. Because of his stance, the Front de Libération Nationale (FLN) regarded him as a traitor, and members of the group riddled his car with bullets in 1960. When Algeria gained independence in 1962, Abdesselam left the political arena and concentrated on his international law practice.

In 1974, Scott founded Tennis Week Magazine, a publication for “committed tennis fans”. With the savvy candor of his “Vantage Point” column, he was admired for his challenging and forward thinking. At times though, those in the tennis hierarchy had difficulty fathoming his approach. Scott’s directness carried him into battle – sans physical combat, of course – when he was a member of the USTA Board of Directors in 1995 and ’96, just as it had in 1972-73 when he was president of the Eastern Tennis Association. Some tennis insiders considered his ideas evolutionary; others regarded them as revolutionary. His work as a player agent received the same seesaw reviews.

Great Britain became the very first International Club in November of 1924. Jean Borotra, one of the fabled (French) Musketeers, began the French IC in 1929. The US joined what has become a 40-nation organization in 1931. Annually, the USIC competitive schedule includes the Amigos Cup against Mexico; the Baker Bowl, which is part of the “Canadian Matches”, as is the Gengler Cup; the CQS 4 National Trophy (in Prague); the Sorlien Cup (with Canada); and The Gene Scott Trophy (with the Bahamas). Beside the Presidents’ Cup, the Avory Cup (against Great Britain) and the Broward Craig Trophy are biannual competitions as well.

As a youngster, the Four Musketeers were Abdesselam’s idols. As his involvement in the game increased, he became aquatinted with the group and over the years, he became a close friend of Borotra’s and provided legal guidance for the legendary performer. He also played a significant role in the international growth of the Lacoste Company. His leadership as Chairman, between 1959 and 1992 is remembered as a stellar time for the prestigious Racing Club de France.

Scott challenged and pushed those who worked with him. He urged each of them to be more than ordinary. This was true at Tennis Week and the tournaments he organized, such as the Kremlin Cup. It definitely carried over to the twenty books and countless stories that he wrote and edited over the years. He was formidable on the court, but even more so off it. He could be intimidating, yet he made a difference by mentoring the likes of John McEnroe and Vitas Gerulaitis. Scott observed high standards and expected those around him to do likewise. All of this justifies why so many in the sport regarded him as the game’s conscience. (And all of this led to his induction into the International Tennis Hall of Fame posthumously, in 2008. He also became a member Court Tennis Hall of Fame in 2000.)

In recent years, soccer has set a precedent staging “friendlies” between rival nations around the world. The International Club has enjoyed tremendous success with similar activities like the Presidents’ Cup. Prior to the competition, Hoeveler, a first time IC captain, admitted that IC events are like no other tennis competition.  The reason is simple. With age group national championships, along with International Tennis Federation Team and World tournaments, there is a lot at stake.

IC matches are not business as usual. The emphasis is on having a good time on and off the courts. The “order of play” is to enjoy the social aspect presented, particularly the opportunity to catch up with old friends and to definitely make new ones. 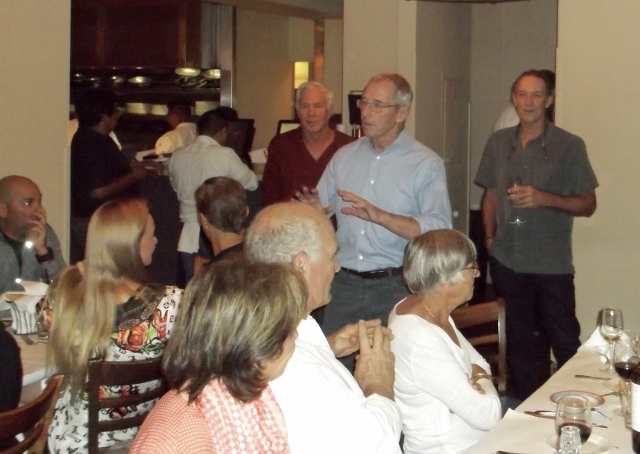 Hoeveler set out to make the Presidents’ Cup a unique experience for individuals who have had a career full of them. To do so, the founder and CEO of US Sports Camps, that operates Nike Sports Camps, used skills forged in making the organization the largest company of its kind in the world. He juggled the match schedule and partner pairings like an award winning magazine layout artist to ensure that all the players had plenty of court time. Assisted by Kellogg’s extensive tournament arranging experience, he created a setting that had a wonderful ambience.  Erika Smith added to the atmosphere by inviting everyone who attended the tournament dinner to come out to the fire pit set up on the beach and introduced the French contingent to S’mores, an American graham cracker, chocolate and marshmallow combination that is headlined by a freshly roasted marshmallow. 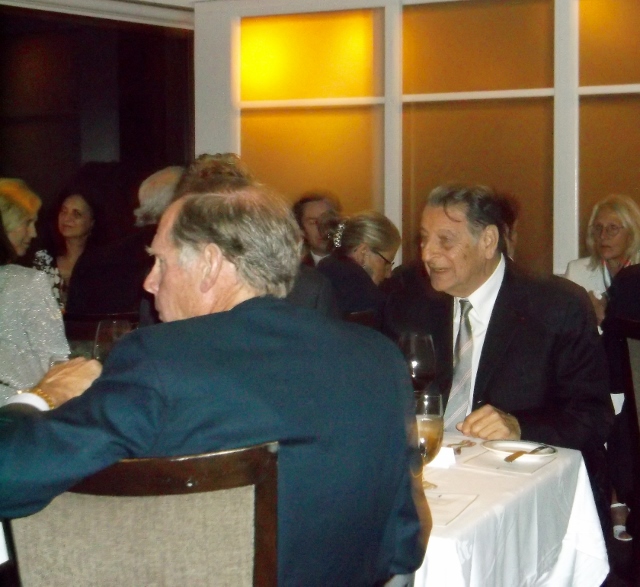 French IC President, Thierry Pham, at the gala dinner, pointed out that the gathering was the first time that his country had played an IC event in California. The presence of Pierre Darmon, the former top player in France, and the individual who Pham replaced as the head of the country’s IC, magnified its significance. 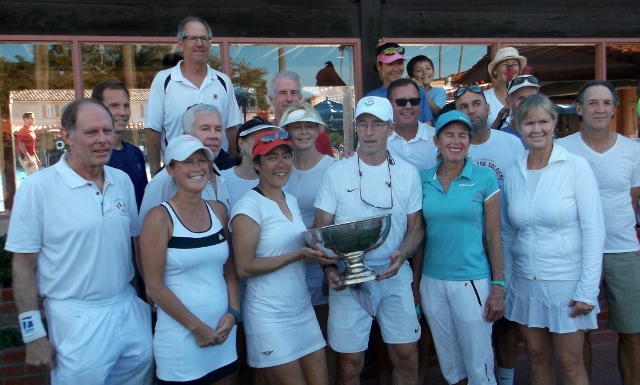 Following the completion of the 2016 President’s Cup, everyone – players and significant others were full of praise. In their minds, the event, in a word, was memorable – one that Robert "Bobby" Abdesselam and Eugene "Gene" Scott would have enjoyed, thoroughly.